Shorter, cooler days and bad weather have meant that I’ve been feeling the fibromyalgia symptoms quite a bit this week…especially the fatigue. There hasn’t been much in the way of watching or reading…I can’t concentrate much and I can’t keep my eyes open. I always seem to return to old favorites when I feel like that–the things that I know so well that if I doze off or space out while I’m reading or watching, I can keep going without losing my place. I did pick up The Little Prince this week. There’s something about that book that brings me feelings of calm and of bravery at the same time…and there are some big things up ahead that I need that bravery for. Poetry seems to pop up every week, sometimes a lot, sometimes just one or two poems, but I never know what I might land on–this week, my reading included a few Rainier Maria Rilke poems (and one day I will find a German/English edition of Letters to a Young Poet.) I also read the first chapter of Jay Coles’ YA novel Things We Couldn’t Say which I’ve been looking forward to reading for a while. I did enjoy the first chapter, but I’m going to go back and read it again when I’m feeling like I can do something other than sleep.

Feeling this way also means viewing old favorites and lots of YouTube videos. I do learn interesting things on YouTube though. I’ve learned this week about student overalls in Finland, and about living in Alaska…and I’ve watched a lot of Cookie Run Kingdom related videos because my younger kid is really into the game (which I’ve started playing too–it gives us something else to talk about and bond over.) What else have I been watching? Halloween wouldn’t be complete without a viewing of The Rocky Horror Picture Show. Sure, there’s problematic stuff, but as with many people, it’s a major piece of developing my queer identity. (There really needs to be a book about that some time.) Fridays right now also mean a new episode of The Great British Baking Show. I’ve already read a spoiler about doughnuts this week, but I’m still looking forward to it.

I do a lot of listening when I’m feeling so sleepy because if I fall asleep listening, I don’t wake up feeling as lost or confused as when I doze off during a movie. Netherlands Bach Society plus (epic) harpsichord plus twenty six unfinished bars of only arpeggios in the Prelude in B minor feel appropriately spooky this week.

A lot of throwback stuff this week, too…I had already been digging deep into my 1990s college days with a bunch of Midnight Oil, Indigo Girls, Depeche Mode, Suzanne Vega…but I had to pull out Billy Bragg’s “Sexuality” yesterday as part of my response to a Twitter thread about an imaginary book discussing the ways that 1990s bands were trying to get us talking about sexuality and gender and no one picked up on it…and it’s still a song I love now. Also, I would totally read that book.

And while it’s not something I’m watching, listening or reading, the cats and I are honoring National Cat Day, so celebrate with us the way Big Cat does and have a good weekend. 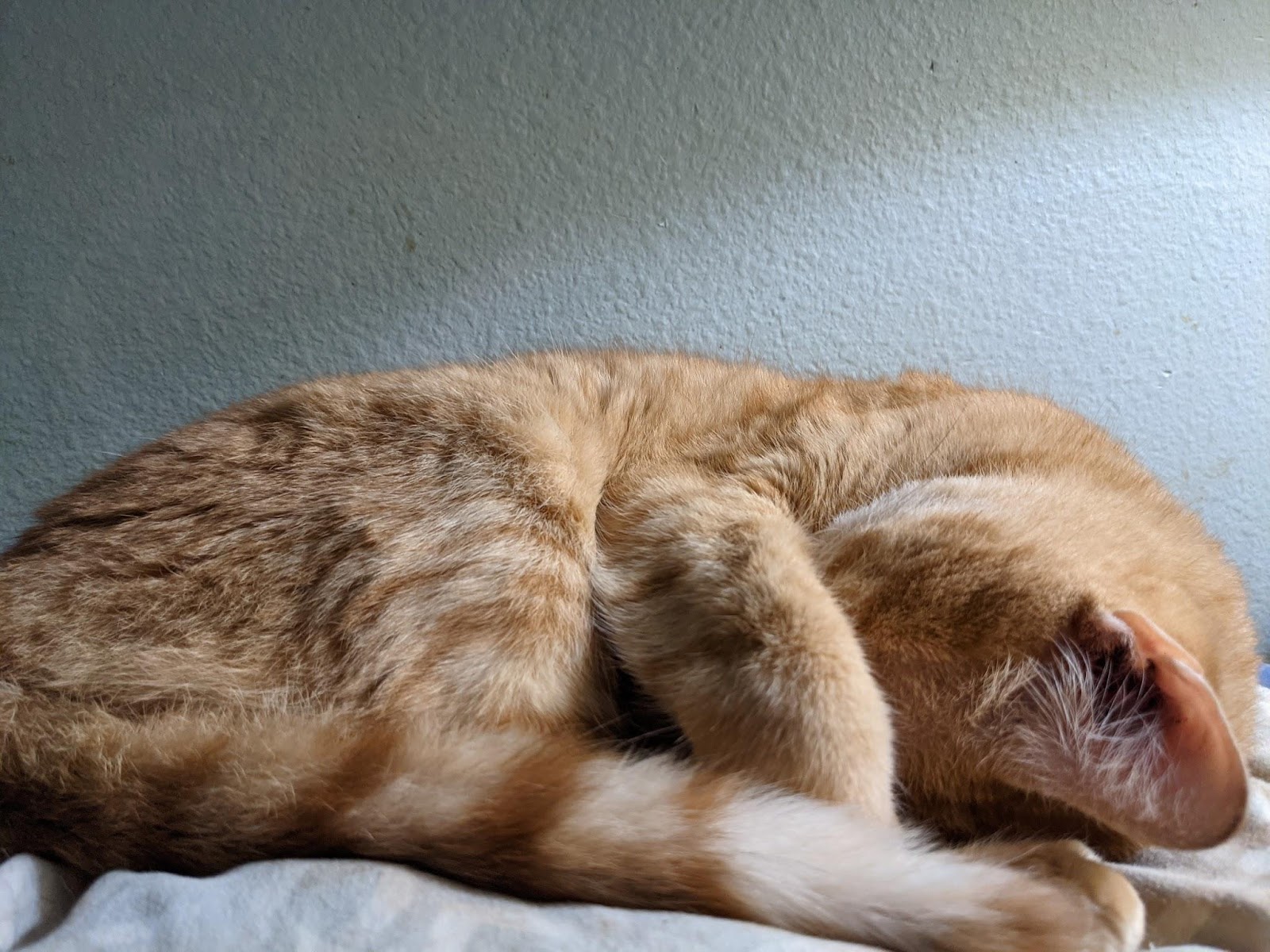 I’m on my last days with Anuja in England so this will be brief. I really have not been listening to music lately. Not sure why. A big part of it is I’ve been spending that time with Anuja–talking instead of listening to music. So nothing new to report on that front. I haven’t really watched any TV or movies this week, for much the same reason. Looking forward to making up for lost time when I’m alone–if nothing else as a coping mechanism for the sadness of leaving.

On the reading front, I just finished Nabokov’s book on Nikolai Gogol. It’s really great. Nabokov is… hard to defend sometimes. But I aspire to give the same measure of attention that he does to any book I read. Reading Nabokov’s notes on Gogol is like reading the most personal and intimate and admiring of love-letters. That same feeling I feel when I’m in love– “I can’t believe you’re real; I can’t believe I get to spend time with you; no wait. I can believe it. I’m just thankful. And it makes me a better person.” That’s the theme of the whole book. May we all read such books more frequently than not. I also like Nabokov’s idea that writing just is. It doesn’t have to be moral or uplifting or conform to certain rules and patterns. In fact it’s better if it doesn’t.